I have lived in Papua New Guinea for the last 25 years. I tried to find doctors who knew about skin problems, but alas, when 99% of the population are of very dark pigmentation, no one is really interested in those of the fairer variety, when it comes to issues of the skin.

I first used a Herbal Skin Cream about 10 years ago. Anything that is slow growing and generally abnormal gets a hit with the cream. I have been to doctors in Australia who have told me that I have Basil Cell Carcinomas.

Before the Cream, I used to have them burnt and cutout, but due to the fact that I could not come to Australia, often, they had a long time to develop. Now, as soon as I find something abnormal it gets a treatment. I have experimented on bare skin with no lesions and get no reaction from the cream. When you put the cream on an active lesion, the affect is mostly instantaneous. There is pain involved, but it always clears up cleanly.

I had a strange growth on my left hand that would not react to the cream, on one of my visits to the doctor in Australia, I asked him why the cream had no reaction with that growth. He had a look at it, and said," that is because it is not a cancer", and proceeded to burn it off with nitrogen.

Even though the application can be rather painful, I find it an extremely effective way to remove growths of most any description that occur on the body.

Cancers (many called skin Cancers, but they mostly come from inside not the outside of skin) are now one of the most profitable conditions for a doctor to treat, so it is no wonder they are fighting against a natural product that cannot be patented or licensed and currently treated for a fraction of the cost in the home.

One doctor I visited shortly after I had treated my face in a number of areas was very critical. He also said I had widespread BCC's across my face, and referred me to a plastic surgeon. At this time I phoned my mother, (who has had a lot of experience treating herself and had recently started taking Gumbi Gumbi, with excellent results, to ask her what I should do,) she advised me to 'Bin' the script to the Plastic Surgeon and to take massive doses of Gumbi Gumbi capsules, which I did, and continue to use the Herbal Cream, I waited and treated myself for a number of months, went to another doctor and asked him if I had any skin problems, he had a look, and said 'No'. I continue to take a reduced number of Gumbi Capsules and watch for any sign of cancers.

I have always been of the opinion that you can tell when a lesion is developing; there are subtle changes, itchiness, rough skin and scabbing. I then treat the area with the Skin Cream, and most times get a reaction.

These are normally very small, and clean up rapidly, with no return of the lesion. I have been more than happy to be a human guinea pig, if you treat your body like a finely tuned instrument, like I do, then trying it yourself is the only way to really know how it works.

I am happy to talk to anyone that would like to discuss the issue. 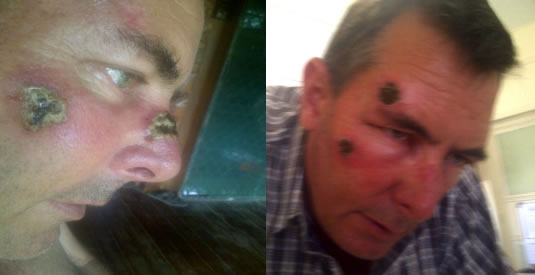 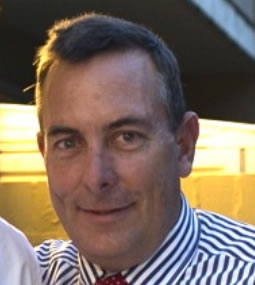 A recent photo, after taking Gumbi Gumbi Capsules and using a Herbal Skin Cream in conjunction. An occasional spot appears and I treat it as soon as possible, I continue to take Cumbi Gumbi, on a daily basis in smaller amounts, I am feeling very well.

Some years ago I had a Large Malignant Melanoma Cancer removed from my arm, I subsequently had another removed about six months later.

In 2009 I developed cancer, again, presenting as Skin Cancers, which are like an Ice Berg and only show a tip and that is when I applied Amazon Skin Cream, if it does not react immediately, or 3 or 4 applications it is probably not a cancer, and if it is, it eats out the Cancer by following the roots for an amazing distance. It was in September 2009, that I noticed further outbreaks and treated the areas with the Cream, many more areas appeared in 2010, which I also treated with the Cream. This treatment can be painful, however, it is very effective, and only takes away cancer cells, leaving little to no scars, it is NOT a preventative.

Balancing pH from 7.00 to 7.4 is essential for other treatments to be effective. Amazon Herbal Tonic, Gumbi Gumbi and Virxcan and many other herbal products can help to treat and prevent.

I was NOT interested in following the traditional path, of the Slash/Radium/Chemo round, I had seen too many of my friends die in agony, a hugely expensive procedure. I did not have the finances available not to work, nor did I have a 24/7 carer.

It was then that I began to search for cancer treatment amidst the overwhelming array available, both online and offline. Little did I know that I was about to stumble upon something much more than I could have ever expected.

By chance I met a gentleman, originally from Colombia. I had a very large plaster on my forehead to cover 2 Cancers that I had been treating for several months, and they would not heal, (and 5 other active areas on my body) which were covered with plaster, he asked, with concern, what the plaster was for? He informed me that Hydrogen Peroxide H202 will treat cancer.

I then took several courses of H202 to oxygenate my system to prevent many ailments, including cancer.

Unfortunately I did not continue with Oxygenation, thinking I was clear of cancer! - Read 'The One Minute Cure' can be purchased as an ebook from my www.heathersherbalhealth.com

I have no idea why I did not continue with H202, when cancer reappeared.

June, 2016 I was introduced to Scalar Wave Energy, which Oxygenates the body, once again Oxygen has been the panacea and I am in excellent health, I will continue using the Scalar Wave Machine and H202. Read more about how Scalar Waves Kill Cancer.

During the earlier part of last year one of our dogs had a red mole-like sore appear on the inside of her leg, which over the next few months rose in height and shape and also became lighter in colour. Around August it started weeping and bleeding and after a vet check we were advised that it was a benign skin cancer. With her being a white, short haired dog, and she loves lying in the sun, it is apparently a common occurrence.

Beginning of October we met Heather from 'Heather's Herbal Health' who advised us to use a Herbal Tonic and MSM in drinking water. We used these treatments every day and found within a week the lump began to change in appearance. Although it did actually continue to grow bigger before starting to shrink it is now approximately 1/4 the size that it was and continuing to get smaller.